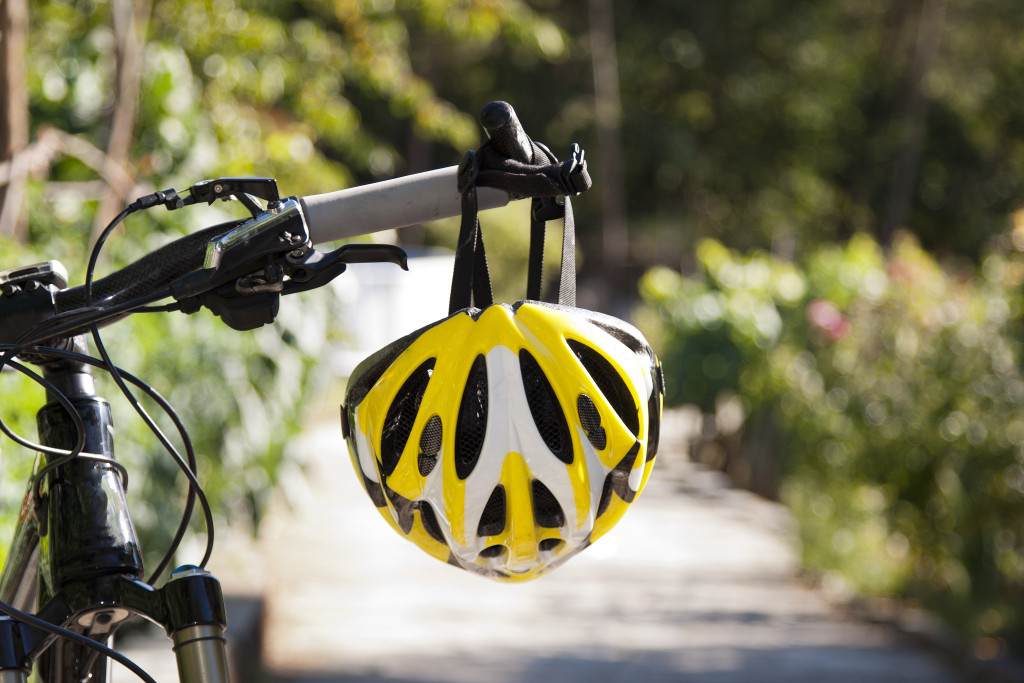 Today helmets have become the main headgear for the people who spend most of their time in the saddle but earlier cyclists experienced lots of injuries until nothing was invented to save their head when they fell while cycling. The evolution of paved roads had also increased the chances of head injuries for the earlier cyclists. Though any authentic information of the evolution of bicycle helmets is not available but it is assumed that they were first of all seen in 1880s. Brief write-up on the history of bicycle helmets is given here under for your consideration.

High wheel bicycles were getting popular around 1880s which increased the need of some kind of protection on the head of cyclist as the roads were also not in good condition at that time. So Pith helmet was used by the cyclists at that time for this purpose. Pith is a plant based material which was used to protect the riders at the time of any mishap. But they have to replace it frequently as the material was not so durable as it tend to break up in just one impact.

By the start of 20th century cyclists started looking for a better option so that it can provide them better protection on road. Then evolved leather halo like ring helmets with woollen top to provide better safety to the bicyclists. Though it was similar to Pith helmet but its padded straps with cotton or wool and leather across the head made it a better option for cyclists. Most of the cyclists used this type of leather helmets until 1970s when new helmets made of plastic shells and foam covering were evolved to cover up various downsides of leather helmets. On one hand leather helmets used to break down quickly due to sweat and on the other they were not effective to protect ears and face of the cyclist while crashing and dragged on the pavement.

In 1970s the protection level of helmets was tested and standardized by Snell Foundation. Later on Bell Motor became the first company to design the initial version the cycling helmets used today. They made Bell Biker as their first helmet for bicycle riders. First of all they used a lexan shell over an expanded EPS liner which was later on replaced by some manufacturers with soft liner like Skid Lid etc.

The American National Standards Institute or ANSI started using Z80.4 in 1984 to make the first set of standards for bike helmets for the cyclist of United States. These standards have set the quality level of the helmets for the bicyclists and helped in removing less-safe helmets from the market. Now the manufacturers of bicycle helmets focused on making lighter helmets as the weight of earlier helmets was also a great issue for the cyclists. They dropped the outer ring of EPS helmets for this purpose which considerably reduced its weight. In 1986 EPS helmets were covered with Lycra and vented to make them lighter in weight. In order to provide more durability and maintaining the light weight of EPS helmets nylon mesh was inserted within the foam by Pro Tec in 1989.

The origin of Aero helmets was another major development that occurred in the field of bicyclist helmets in 1980s. These tear drop shaped sleek helmets were made to make the bicycle rider more efficient and aerodynamic while cycling through air. During this period Bell also used the combination of D-ring and nylon strap to keep the helmet safely on the head of the rider. The clunky closure used in these helmets was later on changed, as it needed both the hands to operate, with plastic buckles which are used until today.

In 1990 they planned to replace heavy lexan shell used since long in the bicycle helmets with some more substantial shells to cover their EPS foam. These new shells were made of polyethylene terephthalate or PET popularly known as thermoplastic polymer or milk jug plastic which is another thin but stronger material used for this purpose. This shell allowed the helmet user to hold it more solidly with him at the time of any impact along with reducing its resistance when the helmet itself or with rider slides on the pavement during any mishap. They bonded the EPS with the shell with the help of a tape or glue in their early models which was later on replaced by moulding the EPS within the shell to develop a stronger integrity between the two and to increase safety of the wearer. For this purpose they used new plastic known as ABS as PET was found unable to handle the heat required for moulding procedure. In this way safer and more effective bicycle helmets came into existence without increasing its weight or thickness as there was no gap between the foam and the shell.

Along with the construction of the shell the helmet manufacturers also focused in various other factors in 1990s to improve them. The use of inner retention systems was one of those points which were considered to make helmets more protective and better placed. Partial use of the remnants of the aero helmets used in 1980s was another change in the helmets of 1990s. Some of them used shaper edge on the rear of the helmet to give them new style as well as increase their ventilation and aerodynamics along with increasing their sliding resistance.

In 21st century though the construction and style of most of these helmets remained unchanged but they were made safer and lighter by making some changes in their design. They modified their structure into a solid cage type design to improve ventilation around the head of the rider along with reducing its weight. Aero-road helmets were introduced in 2012 which were made not only for one time trial use but for the events like triathlons as well as daily workouts and races. These round shaped helmets eliminated helmets with long tapered tail which were popular as aero helmets. These new helmets not only maintained the ventilation and protection of the head of the rider but also increased their aerodynamic efficiency.

Thus during the entire journey of evolution of bicycle helmets the focus was mainly on the protection of the bicycle rider participating in competitions by taking the benefits of technological developments in the due course of time.