Greetings, bicycle lovers! I hope that you’re all having fantastic ends to your summers and that you’ve put many miles on your bicycles. I know I have!

After cycling long distances, I examined my bike this past week and realized it’s seen better days. Although I’m quite attached to it, I began thinking about the possibility of purchasing a new ride.

I hopped online shortly after to begin looking at possibilities. I haven’t shopped for a new bicycle for some time, so I was shocked to see that the prices of some of my old favorites had skyrocketed significantly. When I discovered this, I looked into the most expensive bicycles in 2017. Out of sheer curiosity, I wanted to see what the price ranges were and why these bikes warrant such a high price on the cycling market.

Therefore, without further ado, I will share with you my findings. Here are the most expensive bicycles in 2017. 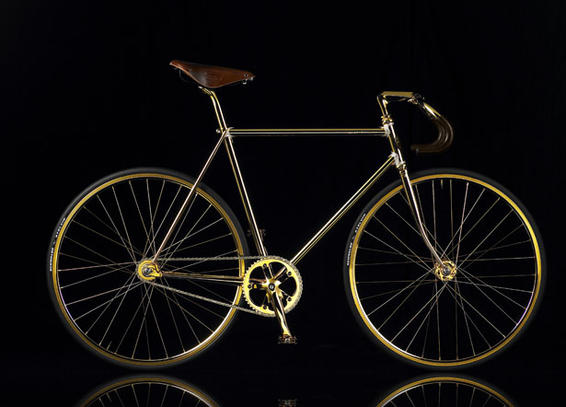 Bike company Aurumania has come out with their new Gold Bike Crystal Edition. Every visible part of the bike is 24k gold plated and the bike features 600 Swarovski crystals. Of course all other parts of the bike are only the best there is, including a Brooks saddle. The bike comes with a 10 year guarantee and is hand delivered worldwide. (source)

Lance Armstrong rode the Kaws-Trek Madone during the Vuelta Leon y Castilla Race in 2009. It was soon auctioned by Sotheby’s for the Global Fight Against Cancer. A collaborative creation between Trek Madone and bicycle designer Brian Donnelly, aka Kaws, this particular bike was meant for Armstrong’s daily cycling routine, painted with classic yellow, black and white theme. (source) 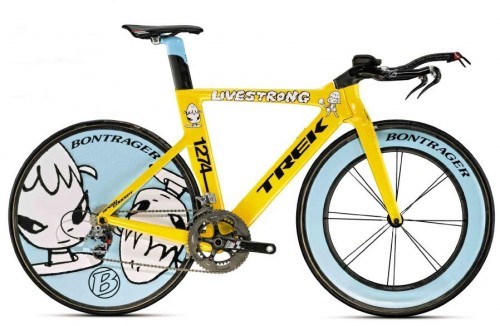 The Trek Yoshitomo Nara Speed Concept bike was developed by Trek and decorated by renowned Japanese pop artist, Yoshitomo Nara. Nara was one of 20 artists that were invited to create bikes for a special Sotheby’s auction held on November 1, 2009 to support Lance Armstrong’s Live Strong foundation. Combining, what is considered by many, the fastest time trial bike in the World with Nara’s original artwork, the bike drew a winning bid of $200,000. In total, the auction raised 1.25 million for the foundation. (source) 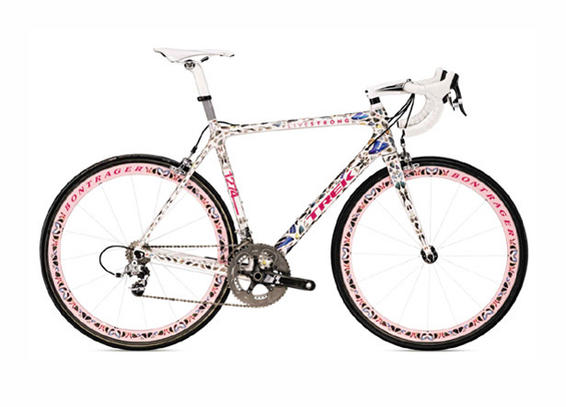 If you are looking for a bike that flaunts some fancy touches, you might want to check out the Trek Butterfly Madone. Designer Damien Hirst used real butterflies to adorn this high end performance mountain bike as a tribute to Lance Armstrong’s return to the cycling circuit after surviving cancer. Even with the butterflies, this mountain bike was made for racing and can perform well, like any other bikes Armstrong rode in his career. (source)

This bike is handcrafted and overlaid with pure 24K gold. Using modern day techniques and taking well over 750 hours to complete, each part was coated to perfection in the USA using the electroplating process. 13 of these bikes will be made for you sheiks, princesses and heiresses. Added for accent and beauty, the diamonds and sapphires are pave’ set on the frame emblem bearing The House of Solid Gold logo, “THSG” is embellished and encrusted with over 600 Black Diamonds (6.0 carats in total) and 500 Golden Sapphires (4.5 carats in total). The one of a kind customized seat is covered in the finest chocolate brown alligator. The one of a kind water bottle is covered in gold and accented with chocolate brown stingray. Finally, the bike is laser engraved with artist signature, dated and numbered as the 1st of 13 and is accompanied with a certificate of authenticity. (source)

Now that we’ve seen some of the world’s most expensive bikes, you all know what I won’t be purchasing anytime soon! However, it’s fun to see what’s out there in terms of the rich and famous cyclist’s world.

Thanks for reading, fellow cyclists, and happy riding!