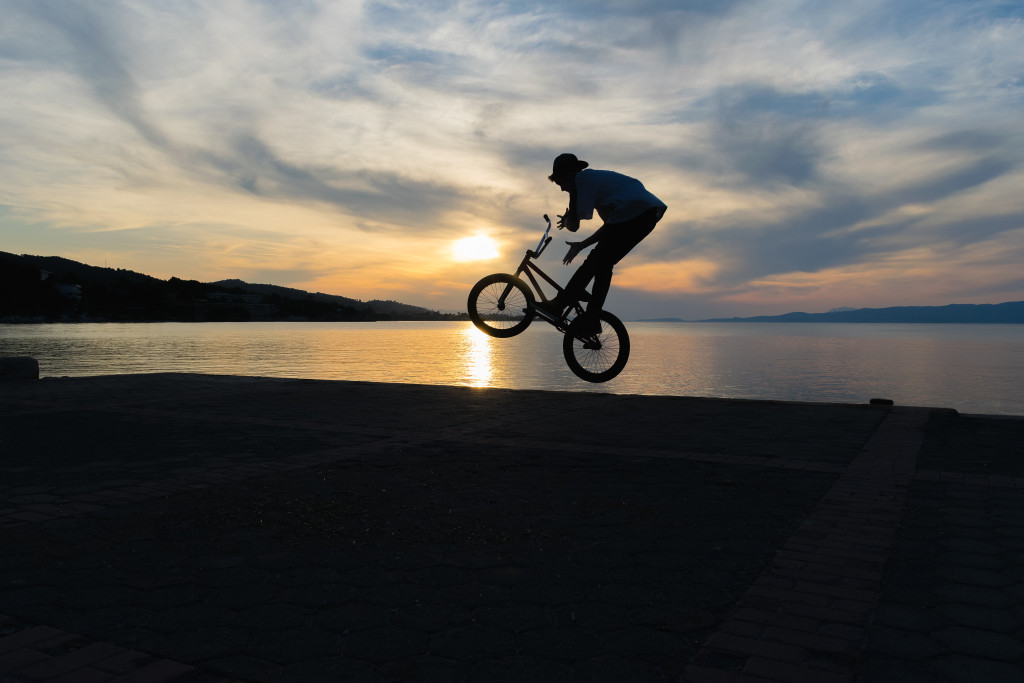 Abbreviated as BMX, the Bicycle MotorCross is a type of cycle sport that is performed on the BMX bikes. The BMX racing is an off-road racing that is performed by bicycles. The BMX format was originated from the motocross racing. This type of racing started when some young cyclists took part in the motocross tracks for fun. They used to perform the stunts and racing, which then evolved the BMX bikes and the racing competitions.

The Race
The tracks of the BMX racing entails a starting gate that has about eight racers. The track is groomed, curved and the riders make several jumps and rollers as they approach the finish line. Normally, the course is flat and is about 4.6 meters/15 feet wide. It has corners that have large banks, which helps the cyclists to sustain their speed. This sport is facilitated by several international and regional sanctioning bodies. These bodies offer rules for sanctioning the flying conduct, it specifies the age group and also, it specifies the level of skills of the cyclists.

History of BMX Racing
Originally, BMX was founded by Scot Breithaupt. Scot was responsible for organizing the first BMX race in 1970, which was held in California. He also founded the SE Racing, which is the manufacture of BMX.

The Conception of BMX
Scot claims that he started racing motocross, where he would practice and perform the jumps. The local kids then started to imitate the jumps. He then decided to start it all with 35 kids from his home area. He split the kids into different classes of skills, starting from the beginner, novice, and the experts. The first day was such a success, and it attracted 150 kids the following week.

Generally, the BMX racing was started when the kids imitated their cycling idols. As they imitated the pros in the sport, it grew into being one of the most active off-road racing.

The Pedal-Cross Racing
In 1971, the kids were performing the normal wheelie and the turns in the air down the street. This was imitated by more kids all across the nation, starting from California. Initially, the sport was named the Pedal-Cross racing. This is because it was different from the normal motorbike racing. Since it only involved the bicycle, it got the name, Pedal-Cross. This changed later to be called the BMX racing, thanks to the flexible and sturdy bicycles that were used.

The Spread across America
The spread of BMX racing was specifical during the summer in the late 70s. Thousands of kids across America were attracted by the sport. The sport involved the boys and girls and each gender had a specific bike. The girls racing did not entail excessive jumps like the boys’ racing. The kids took part in the dirt lot with their bikes wherever they could find the space of doing it. They started performing the turns in the air, along with other tricks. By the late 70s, several BMX races were organized around the nation.

The American Bicycle Association
After the loosely organized races increased in numbers across America, it was time to develop a sanctioning body. That is when the ABA, American Bicycle Association was formed. The ABA helped to fulfill the need of the cyclists. Also, it helped to transform the future of the BMX racing. Everything changed in the BMX racing world when the ABA was formed. Once the ABA was created, a system that determined the qualification of the cyclist was introduced. This system was fair and also, it helped to improve the competitive nature of the sport. This helped to give each rider the chance of winning.

The fairness and the creation of chance to those taking part in the race helped to shift the system. Here, the winner of every race advanced to the next round. The next round would be the quarter, then semis, and finally the main event. With the introduction of the system to determine the qualified participants and giving each of them the chance to win, the ABA became more successful.

Achievements of the ABA
The American Bicycle Association was developed with an aim of improving the state of the race. It transformed the entire sport in a great way and it managed to make some achievements. Some of the achievements include the following;
• First Body to call Fouls as they happen.
• First cruiser class racing.
• First voice commands.
• First computerized sign-ups, membership and point systems in the bicycle racing.
• First and most valuable National Amateur Championship for all ages.
• First auto- gate system.
• First interactive website to serve its members.
These are some of the achievements that made ABA a top sanction across the world.

The Olympics and World Cup
Later on in 2008, the BMX racers from America that raced on the NBL and ABA tracks took part in the Olympics and they won three medals in Beijing. They also took part in the BMX World Cup Events. After the BMX racing was listed as an Olympic Sport, the US Olympic, and the USA Cycling bodies worked with the ABA. The three bodies collaborated to develop an Elite and an Amateur track at the Olympic Training Center. This was in Chula Vista, in California.

The USA BMX
The biggest change and transformation of the BMX racing happened in 2011. The ABA purchased the assets of the NBL, National Bicycle League. This saw each track and member from the NBL being included in the ABA committee. Currently, the two bodies are united under one sanction, the USA BMX. The USA BMX racing is a type that is dedicated to the youth and specifically the American community. The new sanction aims at developing the young girls and boys into being professional cyclists. It encourages the participants and holds different pieces of training in their official training centers. As of now, the ABA has more than 70,000 members and it has the duty of developing racing rules. The rules are aimed at offering fair competition and an environment. One thing about the members of the ABA community is that they have been dedicated since its conception. This is supposedly the reason why the Body has been active since it was developed in the 70s.